What is ADB or Accelerated Death Benefit? 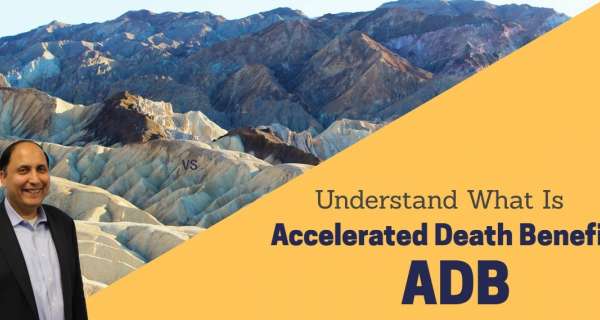 An ADB or accelerated death benefit is the benefit attached to life insurance policies. This insurance benefit pays the insured while he is still living. This lets the policyholders receive advances in cash and not the death benefit when the holder has a terminal disease. Individuals who prefer ADBs are those who have less than a year left. The money they receive is what they use for additional costs like medicine and treatments so that they can keep living.

When choosing insurance policies with accelerated death benefits, the policyholder can then pay for day to day expenses. Another upside is that when they pass away, their loved ones do not have to worry about the final expenses such as funeral and burial costs. In fact, they can even live comfortably. This kind of benefit started around the late 1980s. This was to lessen financial pressures, especially individuals who were living with AIDS.

There are policies that have this available for their holder even if it is not stated clearly in the contract.

How does an Accelerated Death Benefit work?

It is worth investing in life insurance. It ensures that the loved ones of the policyholder receive the financial protection required when the latter passes away. It is also an opportunity for the holder to provide for his family if there is a tragic and unexpected occurrence – like accidents. However, what about those who have conditions that are draining their bank accounts?

This is where the Accelerated Death Benefit comes in and becomes the savior. In most cases, people going through the terminal and diagnosed illnesses are considered to be eligible to get the ADBs. This is the reason why it is also regarded as a living benefit.

Definition of a Living Benefit?

A number of insurance companies provide living benefits in the form of the rider through life insurance policies. It comes in different forms of packages and there are lots of payment options to choose from. All in all, these have living death benefits. The death benefit is received when the policyholder has already been diagnosed with a terminal disease. It can also be obtained when the policyholder eventually contracts a disease.

Contacting a terminal disease is definitely not in the mind of most people but for a majority, living benefits are something that they prefer to have in their policies. By having this, they can receive a particular percentage from death benefits. The percentage depends on their insurance companies. After death, the remaining percentage of the benefit is then paid out to the beneficiaries of the policyholder. If the holder recovers from the illness, they do not have to repay what they received in the form of benefits.

Seniors who are terminally ill have insurance policies that can receive a percentage of the death benefits from their insurance providers way before their death. These benefits can also be used for any kind of assistance, especially for senior citizens. They can use this for nursing home care, hospice, assisted living and home care. ADB beneficiaries can also receive death benefits even if it is reduced in the amount of the ADB.

ADBs are relatively new options. This results to elderly individuals who have been holding their policies for a number of years but not noticed that they can get the ADB in there. Policyholders who are interested should also ask their insurance providers if this option is available for them. The advantage of receiving accelerated death benefits is that they let policyholders have a percentage of the death benefit even before they pass away. There is no really major downside to this. The limitation is that there are policyholders that are required to only obtain this if they have been diagnosed by hospitals that they are terminally ill.

The same option that can be provided to terminally ill seniors is regarded as the viatical statement. Under this, policies are sold to the third party and the holder receives a settlement that is of a lump sum. The difference between viatical statements and that ADB is that with the latter, policy owners continue to pay monthly premiums. With the former, the person who purchased the policy is in charge of the payments on a monthly basis. This is the very reason why seniors prefer viatical settlement instead of accelerated death benefits.

Death benefits which are also regarded as life insurance loans are options for seniors. This kind of loans with low interest allows the policyholder to borrow despite the cash value that is stated on the insurance policy. Borrowers can then pay the debt that they owe in their own time. They also have the option to not make payments. During the time of the death of the policyholder, the loan amount including the interest is then subtracted from death benefits.

Accelerated death benefits have no restrictions. Most cases have families who receive ADB putting the resources to a cost that provides food for loved ones. This is not a requirement nonetheless. The benefits are then paid out in a lump sum that arrives to policyholders once. However, there are insurance companies that offer installments. These policy holders then get an amount every month. It is very important to distinguish which option is better for them and has more impact on the eligibility of the Medicaid insurance of the policyholder along with their loved ones.

When applying for accelerated death benefits, there is a requirement to release medical information. This lets the insurance companies be in the know of the life expectancy of the person that will be insured. Benefits are then paid out in four to six weeks.

It is important to note that ADBs can have as high as 95% when it comes to death benefits. The insurance provider also sets maximum benefits that are based on the life expectancy of the holder. This then makes him come up with a final decision on the financial advance that they are required to obtain. It is very crucial for policyholders to also know that ADBs are not taxed.

An individual qualifies for living benefits if he or she has been contracted or diagnosed with a terminal disease. They are then expected to die in just a matter of two years. If they have this illness then this reduces their life span. If the diagnosed illness requires the policyholder to have an organ transplant, then the benefits cover their care in a hospice, even if this is long-term care. Accelerated death benefits provided to individuals who require assistance on a daily basis. The definition of this assistance are activities such as using the toilet and bathing.

The cost of living benefits also depends on the insurance provider. If the policy already includes coverage, then the cost also comes with the policy. If this is not the case, policyholders pay fees or percentage for the death benefit.

ADBs are usually not taxable. This is because the benefits are tax-exempt for those who expect they will die in a matter of two years. This kind of benefit is not there to serve as a substitute for long term coverage. It is a supplement for the costs that the insurance company failed to cover. If policyholders think that they are eligible and qualified for death benefits, it is best that they clarify this with their insurance agents. They should also remember that receiving living benefits affect their eligibility for SSI as well as Medicaid.

Example of an Accelerated Death Benefit

Here is how accidental benefit riders can play the policy out.

1. The client has a critical, terminal and chronic illness that qualifies under the insurance.

2. The client has filed a claim that accelerates the portion of death benefits.

3. The claims department, as well as the underwriters, are responsible for reviewing the prognosis ratings as well as the medical records of the potential policyholder. This is how they can estimate the discounted offer. It depends on the life expectancy and if there will be changes. If life expectancy is high, then the percentage that is offered to the client is also high.

4. Once the client accepts, then they can receive the lump sum of the amount that has been determined in a matter of two weeks. If the death benefit is then accelerated, then the face that remains is $0. The policy is also terminated. If there is still part of the portion remaining, then the premium of the client will also be reflected on the new face amount.

Regarding chronic illnesses, there has been a proposition but it has not yet been adopted to the rider. The IRS is yet to provide their policies on payments of critical illnesses. There is hardly or probably no accelerated benefit that is taxed by IRS. This is considering that the policy is turned into a MEC or a modified endowment contract. Once this happens, then it will remain a modified endowment contract.  All the benefits that go with it will also be taxable. Policyholders are advised to always have tax advisors or CPAs with them whenever they deal with IRS.

No one can predict the future. No one wants to ponder on how they will die – whether they will suffer from a terrible illness or they will die in their sleep. Nonetheless, it is crucial that everyone plans for worst-case scenarios possible. Loved ones deserve as much protection as they can especially when it’s the head of the house who is diagnosed with the illness and is counting down the days. If this happens, then the holder will only leave his loved ones with quite a massive debt due to the final expenses. Funeral and burial expenses are also not cheap. They can be quite expensive. So if loved ones already have debt, giving them more debt is not a good idea. Not only do they lose someone they love dearly, but they will also be in a difficult financial situation.

A common reason why a number of people do not get life insurance or even an accelerated rider is they assume it is quite expensive and way beyond their budget. That is not far from the truth. There are situations when there are multitudes of options that provide your family with the life insurance and protection that they need.

The best and easiest way to obtain the insurance rate at its lowest is through an insurance agent that works independently. Unlike traditional agents, these independent agents do not work with just one company. They represent dozens of insurance providers that are highly rated all over the nation and they can easily bring the lowest premiums to the policyholder.

Insurance companies are different from one another. For one, they have different ways of calculating their premiums on the riders and life insurance. In order to get the best rates, compare multitudes of quotes even before choosing the best insurance policy that works for you. It is a waste of time calling each and every agent. Go to one expert and compare all the possible plans that you can have.