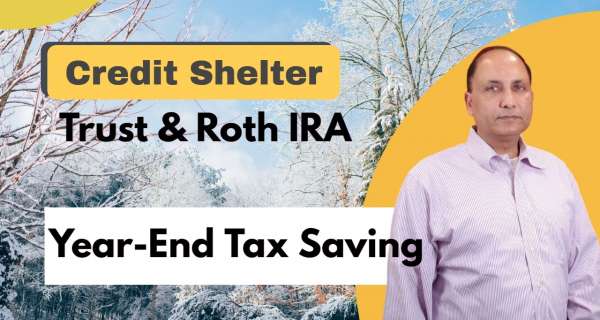 Reverse QTIP Election: When you elect to treat your spouse as your surviving spouse for federal tax purposes (called the "QTIP election"), you're entitled to an unlimited marital deduction. That means that if your estate is valued at $1  million and your spouse is $500,000, you can pass all of the assets to him or her without owing taxes. But if your estate is more than the federal limit (currently $2 million), using a QTIP election may jeopardize some of your benefits. That's because for every dollar over the federal limit that passes to your spouse, an additional one-third in federal taxes is charged. If you make a "reverse QTIP election," however, your spouse can inherit up to $1 million free of the estate tax and the balance would be taxed at only one-sixth above the limit.

Roth IRA Conversions: You can convert a traditional IRA into a Roth IRA on a tax-free basis if both your AGI and your modified AGI are less than $100,000. Your converted Roth would be allowed to grow on a tax-deferred basis, but you couldn't touch the principal until after five years have passed or you reach age 59½. You can make this move even if you don't expect to be in a lower tax bracket when you retire.

What is Roth IRA?

Roth IRA is an Individual Retirement Arrangement (IRA) that is sponsored by banks and other financial institutions. The major advantage of such accounts for individual investors is that annual contributions may be made to Roth IRA on a post-tax basis; the money invested in these accounts grows tax-free, and withdrawals at retirement are not taxed as income.

Any earnings that are withdrawn from the Roth IRA before the holder turns 59 1/2 years old is subject to a 10 percent early-withdrawal penalty unless certain conditions are met (the account owner becomes disabled or they pass away). There is also no requirement for minimum distributions during the Roth IRA holder's lifetime; as long as the account is open, one can continue to make contributions.

This tax-free withdrawal feature makes the Roth IRA especially attractive to retirees who are in a higher income bracket during their retirement years (when compared to when they made their contributions). For instance, say an individual contributes $5,000 into their Roth IRA every year for five years and then retires. If they are in the 28 percent tax bracket during their retirement years, withdrawing $21,000 (the cumulative amount contributed) from the Roth IRA would only yield $15,840 of after-tax income since they would not be taxed on withdrawals [$5,000*.28 - ($5,000 + $5,000 + $5,000 + $5,000)].

However, since they are older and in a higher income bracket during this five-year period of withdrawals, if the same amount was withdrawn from a traditional IRA instead, they would have to pay taxes on the full withdrawal amount at their marginal tax rate. Therefore, even though Roth IRA contributions are made after-tax, they will eventually allow retirees to pay less in taxes during retirement.