FBAR: Who Should File? 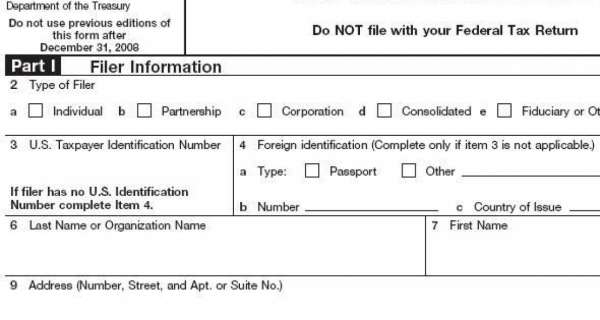 Under the American tax law, if you are a U.S. citizen who has either signature authority over or financial interest in any foreign financial account, you are required to report your account annually to the Department of Treasury via electronic filing.

May your foreign financial account by a bank account, trust, or mutual fund, you have the obligation to file both the Financial Crimes Enforcement Network (FinCEN) 114 and Report of Foreign Bank and Financial Accounts (FBAR).

Unfortunately, many U.S. citizens are not very familiar with the FBAR so before they know it, the U.S. government is already there to go after them and their penalties have already piled up.

Cases of U.S. citizens residing outside the U.S. were up the creek for not filing their FBARs are rampant these days, thanks to these people’s ignorance of the law. But since ignorance of the law excuses no one, you can’t just say no one told you about this FBAR thing and expect to be absolved at the end of the day.

Recently, a U.S.-Canadian citizen was in trouble for failure to file his Report of Foreign Bank and Financial Accounts (FBAR).

Jeffrey Pomerantz, a dual citizen who currently resides in Vancouver, Canada, is now being sued by the U.S. Justice Department for failing to file to the U.S. government his FBAR. The department filed the case in the U.S. District Court in Seattle and is now seeking civil and late payment penalties amounting to $860,300.

While Pomerantz filed his income tax returns to both the Canada Revenue Agency (CRA) and Internal Revenue Service (IRS) in 2007, 2008 and 2009 he failed to file the other form known as the FBAR.

According to Toronto-based lawyer Hari Nesathurai, the past couple of years have seen an increase in cases of Canadian residents being chased by the U.S. government for failing to file their FBAR reports. The lawyer said FBAR is a problem for many Canadian residents who are subject to U.S. tax laws because they do not realize that even a Registered Retirement Savings Plan (RRSP) calls for disclosure.

“Many people don’t realize that and it’s troubling because it’s a penalty which applies on a non-disclosure even though there may be no tax payable,” he said, adding that the FBAR is particularly a major concern among Americans and U.S. citizens or green card holders who do not fully understand their reporting obligations.

Going back to Pomerantz’s case, the lawsuit against him filed in May 2016 indicates that the events that led to the U.S. government chasing him for his failure to file his FBAR seem to have begun in 2010 with an audit, which is now before a different court.

The lawsuit reveals that even before the income tax examination commenced, Pomerantz had already failed to file a Treasury Form TD F 90-22.1 (FBAR) for the three years in question to offer disclosure of his existing foreign accounts. However, the U.S. Justice Department said Pomerantz opened at least two personal checking accounts at the Canadian Imperial Bank of Commerce prior to Jan. 1, 2001, and both accounts were active from 2007 to 2009.

The Justice Department also said in 2003, Pomerantz established a corporation in the Turks and Caicos Islands named Chafford Ltd., which held his personal investments. That same year, he also opened three bank accounts in Sal Oppenheim JR & Cie in Switzerland, and in 2007, he opened two more accounts in the same country and the same bank.

The lawsuit also reveals that during each of the three years, he incurred balances not only in the CIBC bank accounts but also in different Swiss accounts over $10,000.

Although the complaint of the U.S. Justice Department says that Pomerantz resided in the United States from 2007 to 2009, the documents presented by his camp claim that he and his wife, also a dual citizen of Canada and Norway, had only resided in California for part of 2008 and 2009 before they moved back to Canada.

The documents prepared by the department read, “The petitioners were residents of Canada during the tax years in question and cannot be liable to double taxation and are entitled to relief under the U.S.” Contrary to that, those prepared by Pomerantz’s side pointed out that the Justice Department’s documents contained several mistakes, both on the IRS’s information and the calculations made in relation to his bank accounts.

In the midst of the controversy, Pomerantz’s camp maintains that whatever mistake or omission was found in his IRS filings was purely unintentional and would not count as fraud, since he filed everything he knew he had to file to the best of his abilities.

On March 3, the U.S. Justice Department issued the last entry in the court file in Pomerantz’s FBAR case by seeking an order to serve the complaint on Pomerantz and his lawyer.

Meanwhile, a controversial agreement has reportedly caused the CRA to transfer to the IRS information about Canadian bank accounts. This transfer has been an issue for many Canada-based U.S. citizens under the American tax law, as this could result in the U.S. government pursuing more Canadian residents for failure to file their FBAR reports.

Should You File an FBAR?

Pomerantz’s FBAR woes stemmed from his failure to know that considering his status, he was actually required to file an FBAR.

Like Pomerantz, there are many others out there who do not know what an FBAR is, what it is for and who should file it. If you are not sure whether to file it or not, here’s the rule. As per the American tax law, you are required to file an FBAR if you are any of the following:

According to the law, you are considered a U.S. person if you are a U.S. citizen, U.S. resident, an entity such as a corporation, partnership, or limited companies created and organized in the U.S. or under U.S. laws, and trusts or estates created under U.S. laws.

The IRS rule also specifies certain exceptions to the FBAR reporting requirements, such as the following:

In Pomerantz’s case, he is a U.S.-Canadian citizen who owns a foreign financial account so he is required to file an FBAR.

How to Report and File Your FBAR

Reporting and filing your FBAR is required regardless of the taxability of your income. The law states that if you hold a foreign financial account, you are obliged to report even when your account produces no taxable income. You meet your reporting obligation by answering questions about tax returns in foreign accounts and by filing an FBAR.

Since the FBAR is considered a calendar year report, you need to do the filing on or before April 15 of the year following the year in question. You need to file electronically through the e-filing system of FinCEN.

In any case, you should not file the FBAR with a federal tax return. Even when the IRS extends the filing period for the income tax return, that does not mean that the period for filing an FBAR is extended as well. The good news though is that the Surface Transportation and Veterans Health Care Choice Improvement Act of 2015 have already been passed, granting taxpayers a maximum six-month extension to file their FBARs. So, should you fail to meet the April 15 deadline for FBAR filing, you have until Oct. 15 of each year to file.

Why You Need to File a Complete and Accurate FBAR

If you want to save yourself from possible civil monetary penalties, make sure that you file your FBAR properly by ensuring its correctness and completeness. FBAR-related penalties depend on whether the violations are willful or non-willful.

When You Are a U.S. Taxpayer Who Holds Foreign Financial Assets

If you are a taxpayer who has foreign financial assets exceeding certain thresholds, you need to file another form in addition to the FBAR—the Statement of Specified Foreign Financial Assets (Form 8938). You file this form with an income tax return.

When You Have Offshore Financial Accounts

Today, the Offshore Voluntary Disclosure Program of the IRS allows those who have unreported taxable income from their foreign assets or other offshore financial accounts the chance to fulfill their reporting obligations, and that includes the FBAR. While this program does not have a particular closing date, you need to do your reporting obligations the soonest time possible as the IRS has all the mandate to close this program anytime.

When You are a Non-Resident U.S. Taxpayer Who Failed To File Required U.S. Income Tax Returns

For U.S. taxpayers who don’t reside in the U.S. and have failed to file the required U.S. income tax returns, the IRS implements certain streamlined filing compliance procedures. These procedures are exclusive to non-resident U.S. taxpayers, whose submissions are reviewed on varying degrees, depending on the response of the taxpayer to a risk questionnaire and on the amount of tax due.

In 2014, the IRS expanded these streamlined procedures to certain taxpayers residing in the U.S. The new procedure stipulates that penalties of eligible U.S. taxpayers who are non-residents should be waived, while penalties of eligible U.S. taxpayers who are U.S. residents will include a miscellaneous offshore penalty. This penalty is equivalent to five percent of the foreign financial assets of the taxpayer in question that caused the tax compliance issue.

If there are streamlined filing compliance procedures in FBAR filing for U.S. taxpayers who are non-residents, there are also procedures that are exclusive to taxpayers who did not file the required FBAR and are not under any criminal investigation by the IRS. If the IRS has not contacted you about a delinquent FBAR, then you need to file any delinquent FBAR through FinCEN’s BSA E-Filing System.

When you enter the system, you need to choose a valid reason for your late filing and enter an explanation using the “Other” option. If your income from your foreign financial accounts are properly reported and you paid your taxes on your U.S. tax return, rest assured that the IRS will not impose any penalty for your failure to file the delinquent FBAR.

For the last handful of years, U.S. taxpayers, residents and non-residents alike, have been grappling with various changes on the IRS’ reporting requirements. Despite these changes, the need for U.S. taxpayers to disclose their foreign assets remains. Criminal and civil penalties as a result of not filing an FBAR have been alarmingly high in the last years and the U.S. government is now more stringent than ever in going after those who fail in this part of the IRS law. So if you don’t want to be in dire straits with the IRS, report when and what you should.